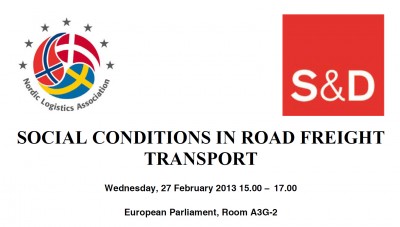 Social conditions applicable to the carriage of good by road

Most organisations representing the transport industry in Europe argue that the sector cannot be deregulated unless the social and fiscal regulations involved are harmonised.

The Romanian, Polish and Lithuanian associations, on the other hand, are in favour of full deregulation of cabotage.

The European Commission expects to table an initial proposal for legislative amendments which will have a significant impact on cabotage and access to the profession before the summer.

Brussels, 27 February 2013. Luisa López Leza participated in the hearing on “Social Conditions in the Carriage of Goods by Road” held at the European Parliament in Brussels.

Organized at the behest of the NLA (Nordic Logistics Association), it was attended by the Chairman of the Committee on Employment Mr. Christensen, the MEP from the Committee on Transport and Tourism Mr. El-Khadraoui and Mr. Hedberg, Head of the Land Transport Policy unit of the European Commission’s DG MOVE. The hearing was also attended by representatives from national transport associations, by the IRU (Road Transport Union) represented by its Brussels delegate Mr. Nielsen, and by the ETF (European Transport Workers Federation), represented by its president, Mr. Parrillo.

As stated by the European Commission at the hearing held on 17 January, the result of an impact study on the implementation of internal market regulations for the road freight sector is expected in the first half of this year. An initial legislative proposal based on this report, which will substantially affect cabotage and access to the profession, is expected to be tabled after the summer.

Against this background of substantive amendments, national associations and unions in European Union countries, together with European social partners have begun deploying their lobbies to influence the EU institutions.

At the hearing held in the European Parliament, representatives of the NLA, ETF and IRU defended the need to retain regulation of the internal road transport markets during the current economic recession. It is true that the market is subject to unfair competition due to internal contradictions which result from the enforcement of the cabotage regulations and the lack of harmonisation in their interpretation. However, they argue that deregulation is not feasible as long as the social and fiscal regulations involved are not harmonised. Therefore, they propose that cabotage operations should continue for a limited time when associated with international carriage, until fiscal and social conditions are harmonised at a European level.

However, other associations such as the National Union of Road Hauliers of Romania (UNTRR) and similar associations from Poland (ZMPD), Hungary (MKFE) and Lithuania (LINAVA) are in favour of deregulating cabotage and, according to the Secretary General of the UNTRR, Mr. Dinescu, would welcome liberalisation unreservedly.

The European Commission’s representative, Mr. Hedberg, said that the Commission wanted to continue working on the review of the internal road freight market and noted that the regulations were not being applied efficiently and that more attention must be paid to enforcement in order to eliminate unnecessary restrictions.